How the Project Evolved- Part One

I hope everyone is doing well, enjoying this wonderful summer and celebrating all the good things our great country has given us and the world.  I want to thank each of you that read my posts and following this adventure.  I appreciate your support so much.
Through many of the postings recently I have spent a great deal of time relaying background information about the geology, history and general information associated with the Swift legend and on occasion some random topics.  It occurred to me  I've never really explained my book project, the background and what it really is about.  With such an obvious omission in mind, I will attempt to bring interested readers up to speed on this project, including progress reports and some of the issues I am dealing with as a new unpublished writer.
First, the subject of the famous legend has been of interest to me since I was a child growing up in the Red River Gorge country of Eastern Kentucky.  Even as early as a little boy, I recall treasure hunters from all over the country showing up from time to time in the region, thinking they have the sure fire solution to the lost treasure.  You can read a little more about that at my very first posting, "about the legend."
Fast forward a few years (more than I care to mention) and while employed by the Kentucky Department of Parks, one of my duties was to produce entertaining and educational programs for park visitors across the state. One such program that I produced was a multi-media slide presentation that offered one version of the legend.  I spent a great deal of time photographing strange looking rocks, researching and producing the program.  Utilizing the book written by my cousin Michael Paul Henson, I wrote a script and eventually with good narration and music soundtrack, came up with a decent little presentation that was shown in perhaps as many as seven state parks during the summer.
Now you can read my entry about Paul in the link above, but I need to tell you, that Michael Paul Henson probably contributed more to keeping the legend alive and promoting interest than any person in the last hundred years.  For it was through his series of books, including the one specifically about the legend, and his unequaled promotion of the idea of treasure hunting in general, that sparked renewed interest. 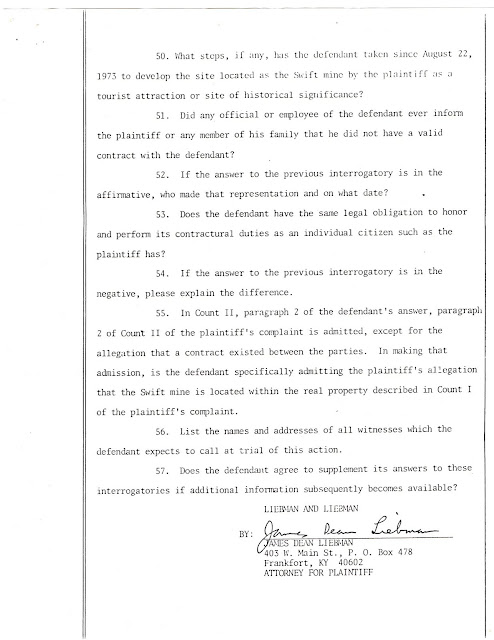 The program received many good comments and apparently was enjoyed by many park visitors.  As it became more popular in the parks, I became known as someone who both had knowledge of the legend and a blood relative to the proclaimed "dean" of treasure hunting all across the country. I was even invited to speak to groups and attend special events concerning the lost silver mines.  But one day the most amazing thing happened. One could not even begin to dream up what happened as a result of that little slide program.  To put bluntly, a lawsuit was filed against the Commonwealth of Kentucky because of my photographs.  Yep, I had managed somehow to get the state sued!. The lawsuit alleged that the slide program divulged the location of the real John Swift Silver Mine!  I had taken all the precautions, so I thought, of obtaining proper permissions of people, photographs from books and music soundtracks.  The general photographs of rocks and landmarks, were just random shots that anyone on a drive through the gorge or a hike on some of the trails could just as easily have made. The suit was properly dismissed from Franklin Circuit Court but it goes to show you just how serious and to the extreme some will take the issue. So, I would say I have a long, colorful and sometimes tortured history with this legend.  More to come in part two!
at June 19, 2011 No comments:

In a previous post I noted that perhaps one of the oldest known references to the Swift legend was in 1793 involving the famous Kentucky pioneer, James Harrod.  Those who follow the legend or search for the treasure, are aware of an earlier reference.  John Filson, who wrote the first book about Kentucky and published one of the first maps of the territory, mentioned the Swift mine in 1784.   Filson never mentions the existence of silver in Kentucky, instead he says there are no reports of any silver or gold on page 25 of his writings.
To be clear, I noted the Harrod episode to be one of the oldest references because he specifically searched for what obviously was an established legend in 1793.  He went to search or visit the mines possibly as a future investor in working mines if such existed.  Now John Filson's connection comes about in a land claim.  Robert Breckenridge and John Filson filed a land claim for approximately 1000 acres of land in the Kentucky country.  That deed  clearly states the claim is supposed to contain the mines of John Swift!

The land grant reads "Robert Breckenridge and John Filson, as tenants in common, entered 1000 acres of land upon the balance of a treasure warrant No. 10117, about sixty or seventy miles northeasterly from Martins Cabins in Powell Valley to include a silver mine which was improved about seventeen years ago by a certain man named Swift at said mine.  Where-in Swift reports he has extracted from the ore a considerable quantity of silver, some of which he made into dollars, and left at or near the mine, together with apparatus for making the same.  The land to be in a square and the lines to run at the cardinal points of the compass including the mine in the center as near as may be.  This is Lincoln Countrie No.10117, issued on May 17, 1788, and filed in the land office at Richmond, Virginia."


So consider, Mr. Filson published clearly on page 25 of his book "iron ore and lead are found in abundance, but we do not hear of any silver or gold mines as yet discovered."  Within two years Filson is filing a land claim that supposedly had the working mine of John Swift.
Daniel Boone, Levi Todd and James Harrod, all reviewed Filson's book manuscript and approved it for publication.  Within four years Filson acquired land supposedly to have the silver mine, in one part of Kentucky and a few years later James Harrod disappeared in another region of the state supposedly visiting the mines.  A very interesting connection I always thought.
I should mention that Filson himself was thought to be killed in an attack by the Shawnee  October 1, 1788  while surveying lands in what is now Ohio.  He was never seen again and he never was known to mine any silver on the Kentucky land claim he had filed just four months earlier.
Anyway, I used the story about Harrod and stated it to be one of the earliest stories because of his unusual disappearance and that he actually was searching for the mine.  However, to be more accurate I would have to say the acquistion of the land by John Filson was an earlier reference.  And there may be other even earlier references yet to be identified.  All this boils down to what I've said for many years and why I do like this Swift story so much.  It is without a doubt the oldest legend known in Kentucky and has been passed down generation to generation since it began from these early reports and that makes it worth remembering.
at June 05, 2011 No comments:

Well folks, its been many months since I have posted on this site. I wanted to check in and report that my historic novel "Swift&q... 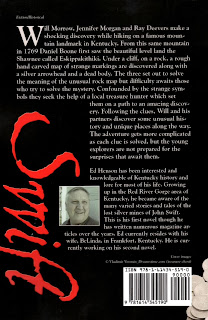